In a press release Russ Christianson, president of the Aron co-operative called the new Dolby surround sound "top-of-the-line, noting the fact that speakers were made by local small business people, "a bonus."

When the movie trailers started, there was cheering from the audience because of the quality of the sound and picture. "'This is as good as Cineplex' was the catch phrase," stated Christianson who explained that in most cases cinema sound systems are now manufactured in China, "something the Aron Co-op wanted to avoid".

"We are so fortunate to have a world-renowned speaker designer who lives locally," he said. "Bill Woods designed our new speakers and Noel Parrott, a local carpenter, built the speaker cabinets." 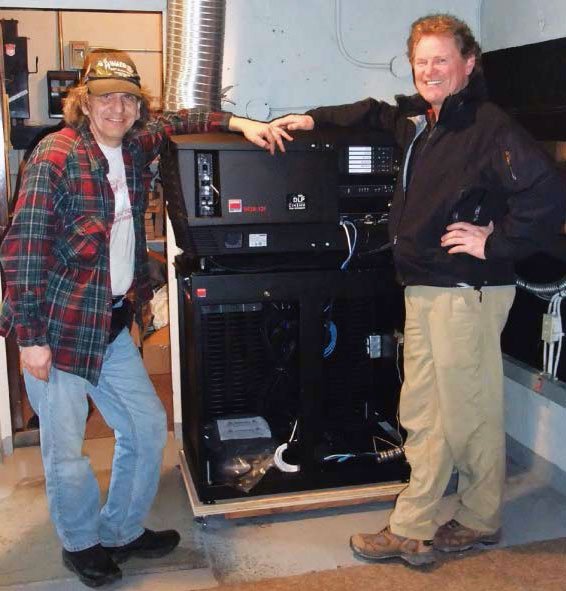 Mark White, left, secretary of the Aron Theatre Co-operative and the lead volunteer in charge of the installation of the new digital projector, is joined by Russ Christianson, president of the co-operative.

Mark White, secretary of the co-op and the lead volunteer in charge of the projector installation, stated he was excited to see, "many new faces coming to The Hunger Games, because the Aron had managed to get the movie only one week after its release".

"Our ability to get Hollywood movies as they are just released is a major advantage of having the digital projector," said White. After receiving feedback from many movie-goers over the past few months, the Aron has also decided to change the movie start time to 7:30 p.m. This new movie time will start on Friday, May 4. Christianson explained this is being done "because people would like to get home a little earlier."

The Aron Theater Coop is now closing in on six hundred members. An annual membership is $20 for an individual and $40 for a family. Members receive a $1 discount on every ticket purchased, voting rights at the annual general meeting, and "As volunteers, they are building friendships and contributing to their community".

"Our vision is to transform the Aron Theatre into a sustainable cultural hub, open to everyone in our community," said Christianson. "And, we couldn't have done it without the support of the Community Foundation, the Municipality of Trent Hills, Ontario Trillium Foundation, Canadian Co-operative Association, and all of our dedicated volunteers."