Aron Theatre made more accessible thanks to grant

Workers spent a day replacing the existing wooden entrance doors with new aluminum ones, and installing a power door-operator. 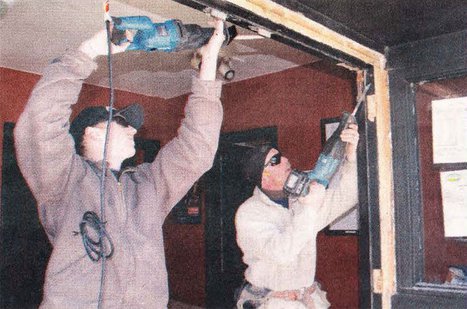 Cody Humphries and Fred Bolton of Peterborough Glass & Window make the necessary renovations to the Aron Theatre in Campbellford, making it more accessible with a push button and wider entrance-way for easier access. Photo: Sue Dickens

"Thanks to a Trillium grant primarily for barrier-free accessible washrooms, a portion was put to the doors as well," said Mark White, Aron's vice president.

"lt's just incredible we get that support. It's really important," said White.

Using local contractors, skilled trades and volunteers, the new enhancement to the Aron was completed in one day.

The job of putting in the new accessible doors was done by Cody Humphries and Fred Bolton of Peterborough Glass & Window.

"We are putting in brand new aluminum commercial doors with push buttons making the theatre wheelchair accessible," said Bolton, the day of the renovation. "We will get it all done today." 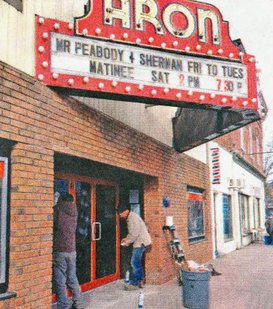 Accessibility improvements to the Aron began in January 2013 with the complete reconfiguration and restoration of the theatre seating area to accomodate wheelchair access including the addition of spaces for patrons in wheelchairs and their companions, White explained.

That project was funded by members of the co-op through seat sponsorships.

"The work was completed with thousands of volunteer hours from members of our community," he said.

The success of the Aron Theatre has led to the coining of a phrase, "We call it Aron-dipity," White added.

From the time the community rallied to buy the theatre back in November, 2009, until now, the improvements and community support has been there.

At that time Russ Christianson, (who was president of the Campbellford-Seymour Community Development Corporation), spearheaded the effort to transform the theatre into a co-op in order to keep it alive after long-time owner Paul Imperial's retirement.

From "celebrities" walking the red carpet to its Wednesday matinees, to local fund-raising events, the not-for-profit co-operative provides a venue for everything from movies and music to community events.

"The Aron Theatre Co-op is a not-for-profit community organization. Our vision is to transform the Aron Theatre into a sustainable cultural hub, open to everyone in our community," said White.

"On May 4, in conjunction with the Aron's Annual General Meeting, we will be celebrating with a number of events that day to showcase our improvements to accessibility and promote accessibility in Trent Hills," said White.

A press release will be issued closer to the date to let everyone know what will be happening.

"The Aron is very grateful for the continued support of our funders, members, volunteers, and neighbours who have enabled us to take a leadership in improving our community," said White.